From Toddler to Teenager


Today my youngest daughter officially became an insufferable teenager. I know this to be true because I've previously experienced the horror of watching two perfectly delightful children morph rapidly into that beastly, ghastly creature known as The Teenager.

I used to think that the hardest part of child-rearing was from birth to 3. The sheer physical demands of sleep deprivation combined with the new and overwhelming responsibility of keeping a fragile newborn alive nearly did me in. Where was the training for this!? And it didn't get easier with the second, or the third. Oh no, I was older but I had less stamina and I was even more tired if that's possible.

Ditto for the absurdly exhausting toddler years-- trying to keep a newly mobile 11 month old from killing herself falling down the stairs, followed by the eternal chasing of a 2 year old around my friends and family's houses, grocery stores, restaurants etc before she wreaked total havoc and/or ran off and got lost was the bane of my existence. I couldn't wait for date nights to get away, but then that usually went like this:

Thank God I spaced them out.*

But things changed around age 3 when my oldest child looked into my eyes and we had our first real conversation. I conversed, intelligently, in a non-baby sing-song voice with a human being that I had created, nurtured, loved and put all my time and energy into for 3 years.

Wowza! What a pay-off!

Despite the exhaustion, I was actually head over heels in love and would never have thought that I could be any more enamored with my child than I already was, but that first real conversation was one of the best moments in my life.  For several years after that I swear I could see her brain developing right in front of my eyes. As a new mom I read all the research that says the most brain growth activity is from birth to 3, so I fed my little growing babies lots of input and they took it all in. It's a good thing babies are so cute. They smile at you, and coo, and snuggle, and you melt with love, which is what keeps you from putting a pillow over your head at 2:30 am when they wake up for the 3rd time that night. And yes, you take pride in their growth and appreciate their healthy development, but for me that all paled in comparison to the little person my child became around 3.

It only got better from there.  For all three of my girls, elementary school was awesome.  Language, art, storytelling, music - they explored, expanded and I got to watch it all.  School plays and spelling bees, times tables and book reports.  And let's not forget those Thanksgiving turkey hand-prints of love.  All of their teachers loved them, reporting what a joy they were to teach.  So smart!  So funny!  So helpful and cooperative!**   What a proud mommy I was!

And then, again, boom!  Sometime in middle school, without warning, it's over. The adolescent transition from sweet to sour is bitter indeed.  One minute you're sitting together on the living room floor playing with the cat and laughing about nothing and the next minute she's slamming her bedroom door and telling you that "in case you hadn't noticed," she's "not a kid anymore," and you "just don't understand her."

So having passed through all the ages and stages of the developing female child twice before now, I can honestly say that the hardest one to mother through is the teenage years.  The hell of sleepless nights with an infant is nothing compared to the agony of a missed curfew.  Learning to live with using the bathroom while a toddler clings to your ankles is unfortunate, but witnessing your daughter's pure adoration morph into withering contempt is utterly heartbreaking. I'm pretty sure that residual affection left over from the cute baby stage is the only thing that has compelled me to keep mothering the monsters they become as teenagers.  That may sound harsh, but trust me, withering contempt is no picnic.

**A little bossy maybe, but that's the subject of another blog post....

Posted by Joyful Rant at 1:04 PM No comments:

A Little Spring in My Step!

Now that my taxes are done (I set a March 1st deadline that I always miss by at least a week), it's time to enjoy March and Spring! So here are: 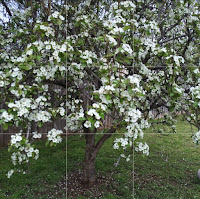 6 Wonderful Things I LOVE about Spring/March:

1.  My Annual Pear Tree Blossoming!  Planted in 1994 alongside a peach and plum tree, both of which are long gone,  it has survived sudden freezes, wildly fluctuating temps in the same week, or even day, and 100 degree summers!

It produces fewer pears than it did in the late 90's and early 2000's but still more than we could ever eat.  Fondest memory is of our late golden retriever, JJ, jumping up to tear them off the tree and eating pear after pear after pear.  That tree misses him! 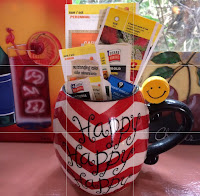 2. Buying Cheap Flowers!  They are everywhere starting the first week of March!  Begonias, Petunias, Impatiens, Zinnias, Geraniums and more.  Actually the geraniums are one of the only ones I can get to flower year after year - they actually flower all year long!  I didn't say I had a green thumb or anything, I said I love the availability and affordability of an amazing variety of flowers! 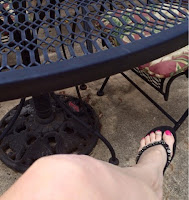 3.  Sitting Outside at Restaurants and Happy Hour. This is the BEST, and in San Antonio, the window for doing this is very small. Not for me - I would sit outside all the time, but for all the people I eat and drink outside with.  Most of them won't put up with the blinding sun, the 95% humidity and the 99+ degree temps.  But from mid-March to late April (and sometimes into May), I enjoy patio seating at my favorite eateries and bars; like La Hacienda and Willies and El Jarro.  It's also flips flops and tank tops weather. 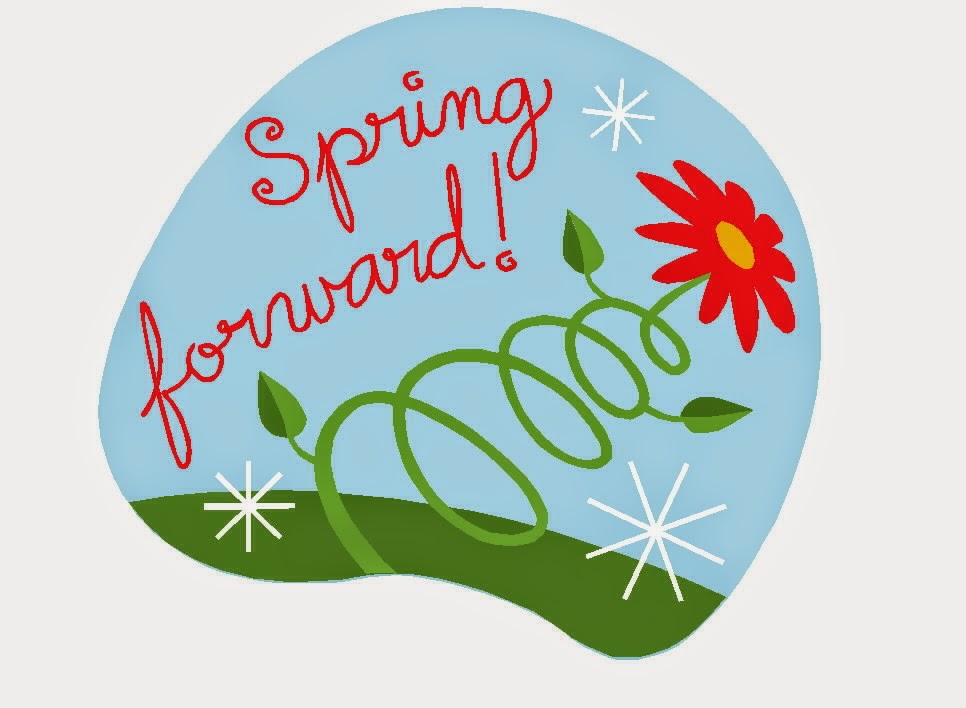 4.  Staying Lighter Later  There is nothing more depressing than when we Fall Back after Halloween and I leave work at 5:30 pm and it's dark outside.  Suddenly no one knows how to drive in the dark and my commute is worse than it's been since the kids went back to school at summer's end.  The opposite happens when we Spring Ahead!  I don't even care about the hour I lost!  Now I can take walks, plant flowers and sit outside after work! 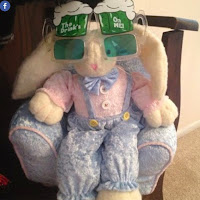 5.  St Patrick's day and Easter When holidays collide!  I decorated for St Patrick's' day at the beginning of March, but I have already pulled out all the Easter stuff because Easter is the first weekend of April this year! All the pastel colors of this holiday are so fun and light and just bursting with springtime energy!  I was actually thinking about not decorating this year because Zoe (youngest child) won't be home for Easter, but Lacey (middle child) talked me out of it.  I was just momentarily delusional.  Bring on the Bunnies! 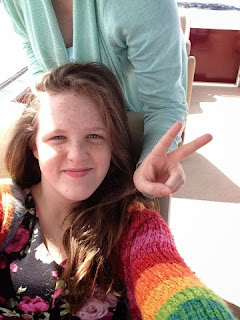 6.  My Oldest & Youngest Kids' Birthdays!  I had two March Babies!  Ariel is about to turn 27 and Zoe will be 13.  I texted them at the lake where they are for Spring Break and asked them to send me a celebratory selfie and this is what I got.  Ariel is anti-picture these days.  Then I got videos of Zoe's hair in the wind on the boat they were sailing on.  I love to see the sisters spending time together happy and having fun.

I cant imagine my life without having had these two girls, and maybe that's why Spring is so special to me.  It's always a time of year when life begins anew, but for me that has really special meaning because it's also when I brought these two into the world.

Posted by Joyful Rant at 2:47 PM No comments:

I know I'm not the first woman to complain about the annual boob-squish, but I'm here to report that it's getting easier thanks to the Boutique Mammogram. My first time by way of this special experience was a few squishes ago but each year, it gets more sophisticated. This year, they gave me a pink rose. Ladies, if we're gonna to have to do this, this is the way to go.


A few years ago when directed to a location called a "boutique" for my annual mammogram, I pondered the word from its waiting room, which featured mineral water, a fountain garden, plush carpet and mahogany furniture.

1. a small store selling fashionable clothes or accessories.
2.  a business that serves a sophisticated or specialized clientele.

Since I am in fact, sophisticated, and special, this place was obviously created for the likes of me.

Today's boutique visit featured donuts, coffee and pink upholstery.  From the waiting lobby, I was directed to a small changing room where I donned the pink, paper gown, (opens in front, ladies) and took a seat in another plush inner waiting room.  Last year's boutique had a puzzle in progress on a table but this one only had a giant, flat screen TV playing Good Morning, America.  I'm becoming a critic.  60 seconds later I was getting intimate with the imaging machine.  Other than the tech apologizing for her cold hands, it was almost, enjoyable. OK, that's totally untrue, the squishing sucks, but the pampering was appreciated.  It's almost like a spa!  (OK it's not really like a spa, but looking on the bright side is healthy, right?). I also appreciated the speed and organization.  The time that elapsed between entering and leaving the boutique parking lot was only 19 minutes. Phenomenal.

This almost makes up for the fact that, apparently, I have spent the last 10 years getting "unnecessary" mammograms.  It kinda sucked to see that 10 years after I started getting them, mammograms are now being recommended at age 50 instead of 40.  Whatever.  I am hoping that next year's boutique will finally feature "fashionable clothes and accessories" too.  Or maybe they'll have progressed from giving away roses to giving away jewelry.  I'm looking forward to it. ;)

Posted by Joyful Rant at 8:54 AM No comments: