Anything You Can Do, I Can Do Better

My earliest childhood memories are hazy and unformed, but a particularly vivid one involves a playground.  I remember a merry-go-round that left my hands smelling of aluminum after hanging on for dear life as my friends pushed me round and round and round again. Running, dodging to and fro, breathlessly avoiding being tagged "It."  Shouting out, along with my elementary school girlfriends, "Anything you can do, we can do better!" And knowing, without a doubt, that for some reason, this playground chant was directed at the boys.

Why was I already feeling defensive and less-than before I was even double-digits?

I felt at a very young age that I was as good as, if not better than, any boy, but over time, especially into adolescence I got a lot of mixed messages.  So, I wondered:  "Why are there different rules for boys and girls?"  For example, why did I have to babysit on Friday nights for 5 hours at a time but my brother mowed someone's lawn, was done in an hour and we got paid the same amount of money!? 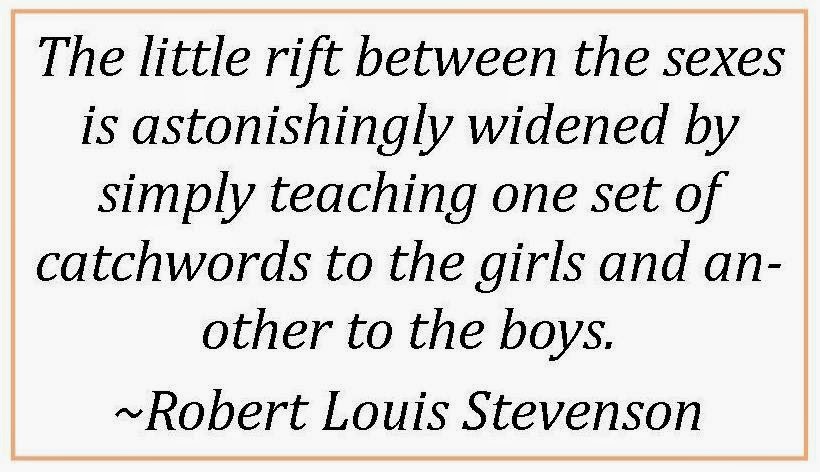 These "silent" gender rules in the first half of my life were barely discernible to me at the time, but I know that I remember them for a reason.   It was like this:

My Parents:  "There is no reason that you could not grow up to be President, someday."
Me:  "But only men are President."
Parents:  "That could change."

Me: "So, why don't my brothers have to wash the dishes?"
Parents: "Because they're boys.*"

My brothers did other (presumably more boy-like) chores such as  taking out the trash, and I was left to conclude that there were appropriate and necessary boy-tasks and responsibilities as well as appropriate and necessary girl-tasks and responsibilities and there must be a reason that would come clear when I was older.  These subtle gender differentiations continued into my young adulthood:

College Career Counselor: "You can do anything you set your mind to, of course, but as a military spouse you really should look into teaching or nursing. (This was actually very practical advice as there are always hospitals and schools no matter where said unemployable spouse is dragged to, but these options were nonetheless unattractive to me and my career as a forensic analyst was lost forever).

Bank Supervisor: "You're a very good employee but you have problems complying with the dress code. I'm going to need you in a dress and nylons every day from now on." 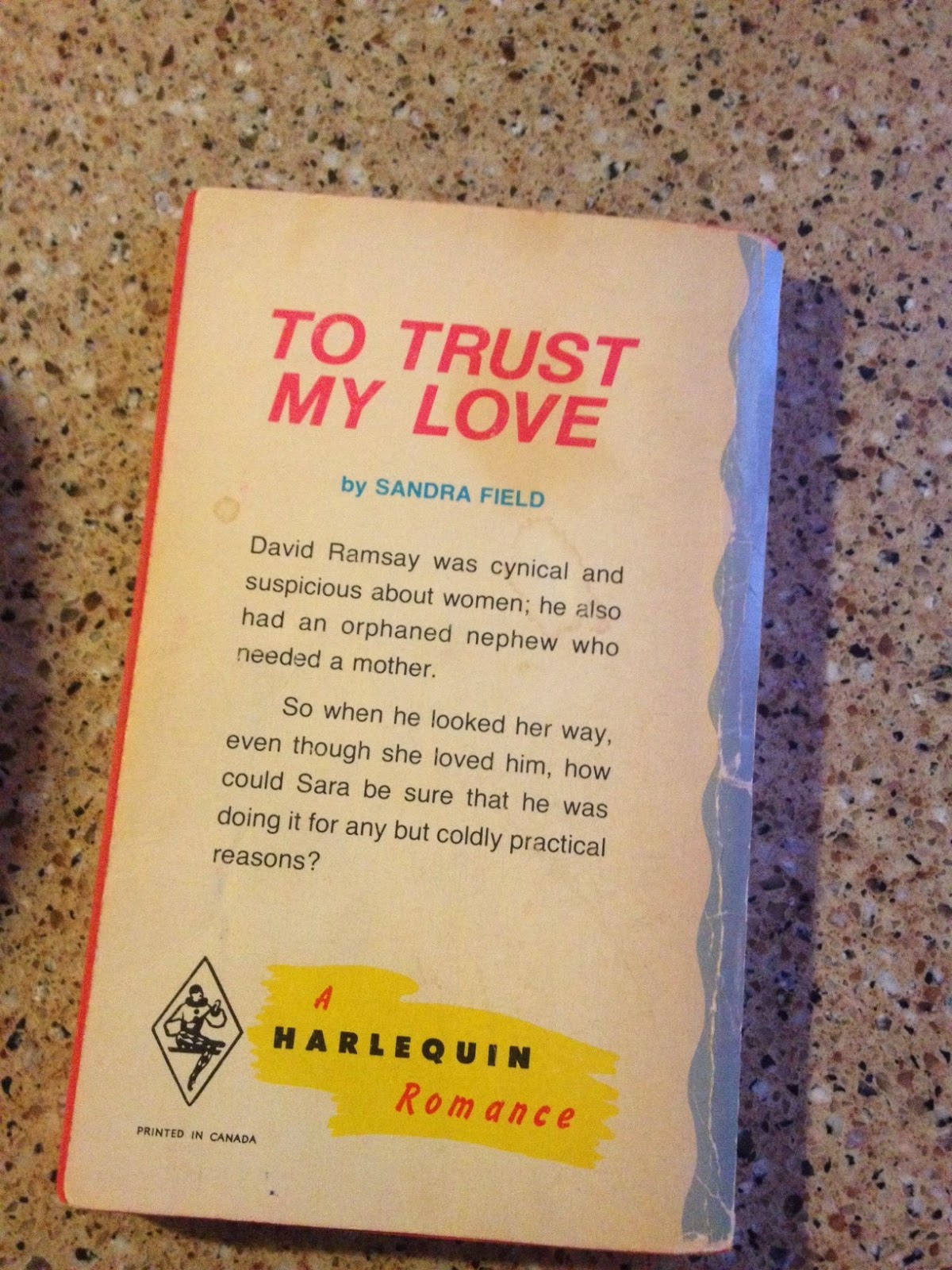 Adolescence:  In my youth I was not subjected to near as many terrible body image messages on TV as girls are these days, but I was immersed into the world of the Harlequin Romance.  The book pictured here is the only one (of hundreds, Dear God) that has survived in my library til today. I was in love with these characters.  I wanted to name my future children after them. (I did not).  Of course after reading thousands of pages of this treacle through some very formative years, getting married as a young woman looked like a pretty happy option.  After dodging what I know now to have been a bullet when it didn't work out with my first love, I met my ex-husband.  Whether or not that went much better is open to interpretation.

First Love:  "Women should stay home with the children so were we ever to get married you would not need to continue on with college." (Uh, even in the harlequin glow of exquisite young love I knew this was jacked up.)

Eventual Spouse:  "My job pays more than yours so it's more important. Your priority is the children."  (I put up with this kind of thing for 20 years).

Grandmother: When are you gonna find yourself another man? (This was yesterday).

Career:  One of the most interesting sexist things happens fairly often to me in meetings that I attend in my role as CEO of the nonprofit I lead - when I am accompanied by a man, meeting with another man.  Women in leadership positions everywhere have probably experienced this in one form or another.  I call it the "Invisibility Trick." Here's how it works:

1.  Me,
2.  The male staff or board member who accompanies me to the meeting, and
3.  The man we are meeting with, call him VP.

I enter first.  Mr. VP is standing to greet us but instead of extending his hand to me as I walk in the door first, he somehow looks right past me to the male who accompanies me.  He vigorously shakes hands with and asks my companion, How are you?  Did you find the place ok?   Can we get you something to drink?  My companion introduces me at the first opportunity. Remember, the meeting was with me, and did I say I went in first?  But I was invisible.  It's a neat trick I can do.  I honestly don't think these guys even know they're doing this.  I say it's annoying but it happens so often that I can't help but be somewhat amused.  Or maybe bemused is the better word.

Future Generations: I can see that it's going to be at least a little easier for my 12 year old daughter.  But, her older sisters (Ariel, 26 and Lacey, 21) and I have some advice and lessons learned for her, just in case.  As I embark on raising my 3rd teenage daughter, in this ever changing world, what I would like more than anything else is to do it better than it's ever been done before.  I probably won't - if there is anything more truer than death and taxes, as they say, it is that I will make mistakes as I try to parent a developing child.  But everyday I learn more, and I have really smart adult daughters, so from us, to Zoe, here are 5 truths to live by:

I look at you today, an innocent, inquisitive, simply delightful 12 year old and I don't ever want you to be disappointed.  One of the things I worry about most is that you will lose your self confidence.  Always remember to stand up for your potential and to set high expectations for yourself.  If you even ever sense a mere hint of gender discrimination, crush it.  It is not fair, it is wrong, and you stand for all women everywhere. Don't ever listen to "advice" or "stats" that tell you otherwise.  You can change for the future what has been negatively pervasive in the past.   Believe in yourself as much tomorrow and in the future as you do today standing on the cusp of adolescence and feeling like anything is possible.  If you think you can't do it, think again.

There are a lot of differences between men and women but none of them result in one gender being better or more capable than the other to reach any goal.

Your sister Ariel also has this advice:  "The phrase "boys will be boys" would be better changed to "kids will be kids" or "teens will be teens," because everyone regardless of gender has a right to be silly and giggly or rowdy and rule-breaking, and to make mistakes along the way."

Lacey also weighs in:  Any time I try to lift something heavy, it's assumed I can't. Any time a task requires physical labor, I'm most definitely not the first choice to ask. When men are in charge, they tend to enlist other men to help them first. It's a norm that most people don't even realize they encounter daily. But I see it all the time in my jobs and at school. The entire notion of "ladies first" just implies that we are weaker or in need of men to help us do things. I'm sure the intentions were once pure, but now things like that are just used as an excuse to be condescending. No one should be thought of or treated differently for being a lady. After all, that defeats the purpose of saying EVERYONE should be treated equally.

Truth #3.  Love Other Women (without fail)

Women are your best friends. I see you and your middle school friends now and I wonder how and why it changes.  I remember the relationships your sisters had at your age and how those relationships changed in high school, becoming so competitive.  Don't do it.

Ariel agrees and says, "Love and respect other women. Don't compete with women for the affections of men. That's like mistake # one. We're in this together."

I was much younger when I first saw this quote and thought to myself:  "Hell, yeah!"  I saw it again after many years, more recently, and was somewhat deflated, thinking abut how little progress we have made.  Don't be as complacent as I have been.  Take no prisoners.  Get in there and do it.  Help close the Leadership Gap.

Ariel has this to add:  "Your opinions and thoughts and feelings matter as much as anyone's, and the worst thing you can do to yourself is to stay quiet because you don't think you've got the right to speak. That's the first thing you've got to know is that you've got a right to be in any room they get into." 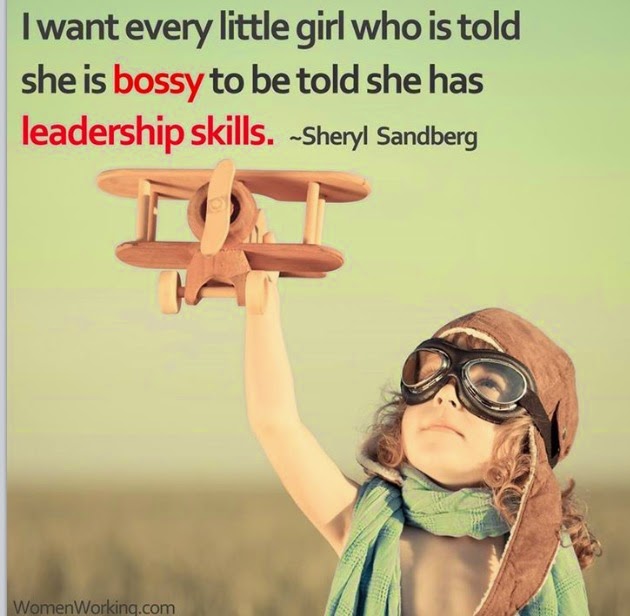 I have been confronted many times by people who confuse assertive, confident decision making with bossiness.  This is awful.  For example, when a man fires someone at work he is described as tough.  When a woman does the same she is hard, and worse, cold. The world needs more women in leadership positions, making decisions that affect us all.  It's highly possible that that man's firing decision was made hastily, without much thought while that woman looked all around her options for days and concluded she had no other choice.

In Conclusion:  In the 18th century, the future author of "Frankenstein" understood that women and men were inherently equal.  She said:   "I do not wish them to have power over men, but over themselves."  That is, indeed, everything that I can wish for my daughters.


This post was inspired during a recent trip to Washington DC:  To Zoe, I hope that when you are raising your future children that there are as many female Democrat and Republican candidates for President as there are female spies in the International Spy Museum.  Its time we came completely out of the shadows.


Remember, Ginger Rogers did everything Fred Astaire did, but backwards and in high heels. ~Faith Whittlesey

No one should have to dance backward all of their lives. ~Jill Ruckelshaus

* My parents did not know they were reinforcing gender bias and they are not even sure it actually exists because my mom totally rocks her world professionally and she doesn't think she was ever held back in any way because she was female.

** This is for work, Granny, not some match.com date